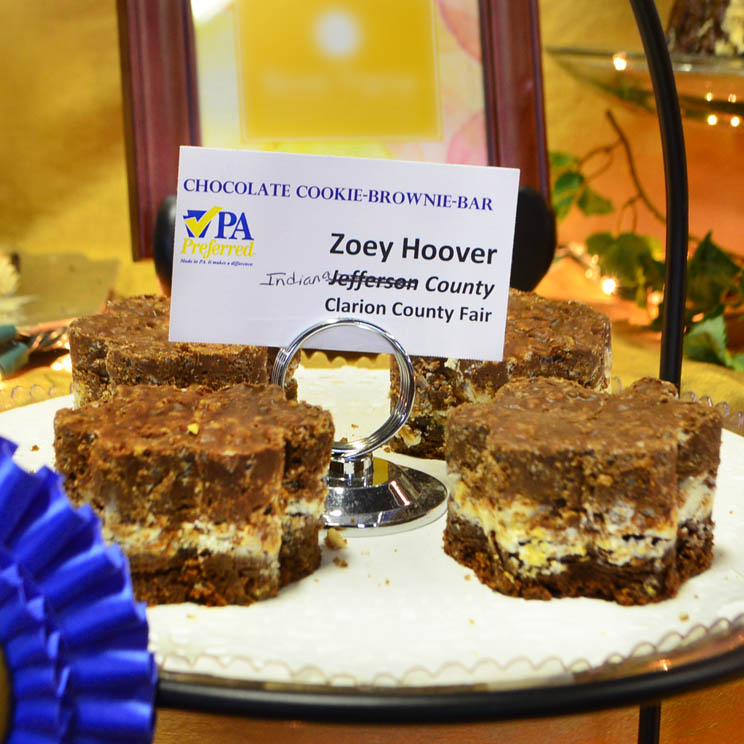 If you appreciate blue-ribbon desserts, the annual Pennsylvania Farm Show is full of recipe-box inspiration – and Crispy Crunchy Brownie Delights is a gem you’ll definitely want to try! I wanted to steal one of these three-layer bars from the display, but decided to make the recipe instead. With crunchy, sweet, chewy and creamy in one dessert, how can you go wrong?

The Farm Show press release said, “Entries were judged on flavor, texture, appearance (inside and outside), and creativity and entrants were required to include at least one PA Preferred ingredient. Each participant was required to present six cookies, brownies, or bars of their own recipe for the judges to taste and each entry had to be made from scratch. The 74 entries were tasted by the judges and narrowed down to 10 finalists, of which a grand prize winner was chosen.”

Ten-year-old Zoey Hoover of Indiana County took home a blue ribbon in the 29th Annual PA Preferred™ Cookie/Brownie/Bar Contest with her recipe for Crispy Crunchy Brownie Delights. In addition to earning the best bragging rights a young gal could have, she was awarded $250 (which she may use to purchase a laptop) and tickets to see country singer Brantley Gilbert.

This isn’t Zoey’s first entry in a PA Preferred™ Cookie/Brownie/Bar Contest. Last year she whipped up a Reese’s Brownie, and she has plans to compete with another creative brownie for this year’s Indiana County Fair. Zoey finds her inspiration when baking with her stepmother, who also enters her own cake recipes for competition.

You’ll notice Zoey’s brownies were cut into a flower shape rather than squares. Creativity is a portion of the scoring, and she gave thought to her presentation for the judges.

One of her favorite secrets about these brownies is the vanilla frosting. Zoey said she tried marshmallow creme as a contender for the filling, but the chalky, chewy texture wasn’t what she preferred for a sweet, smooth filling.

I can happily talk about the PA Farm Show until I’m blue in the face, but until you get there you won’t know what you’re missing. Plan on visiting next year – on an empty stomach – and arrive early in the morning. Your to-do list should include (at the minimum) the velveteen rabbit snuggles, giggles by the duck slide, maple cotton candy, a butterfly tunnel, hands-on gardening demos, fried cheese curds, and cooking demonstrations. And all that after you meet award-winning chickens of all sizes and colors!