There was a recipe card for this pie.  I used it every year for the black raspberries Dan grows behind his wood working shop.  Know when you know you put something somewhere then it’s gone?  You’ll open your freezer and find the fresh asparagus or the pile of laundry spits out your favorite mug…it happened to this recipe.  It has not surfaced yet.  It was Dan’s grandmother’s recipe and to make it even weirder when I called his mom and aunt they had no idea what I was talking about.

I know there was a recipe card for this…

It should be called the twilight zone raspberry pie.  Coincidentally, I just did the same thing with a bottle of Rum Chata.   Someone is having a good time.

The pie.  It’s so easy and it is Dan’s favorite dessert so an attempt had to be made card or no card. Samples had to be shared and one gal, when a pre-warning was given that it is not a “solid” pie (it spreads when cut), said folks get too used to pie from the grocery store… expecting it to keep it’s pristine shape when sliced.

We talked pies, fillings and such here.  This recipe uses pudding as a thickener.  It does not need to be baked.  I have prepared it 2 ways.   Sometimes I pre-bake the crumb topping or put the crumbs on top then baked the crumbs on the pie.  If gluten is a concern use spelt flour for low gluten pie. 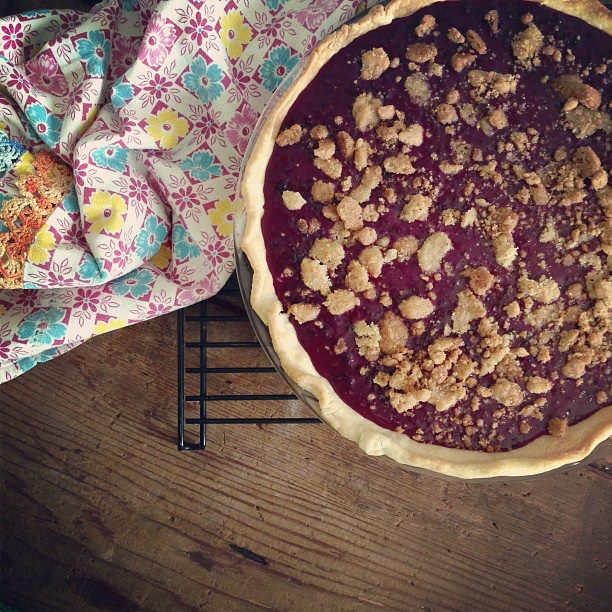 Heat oven to 450°F.  Spread the crust in the pan and poke a few holes with a fork.  Use 2 cups dried beans to weight the crust, if you like.  Bake the pie crust 9 to 11 minutes or until light golden brown. Set aside to cool.

crumbs topping, bake it as you need it recipe

Mix all these ingredients together with your fingers until crumbly.  Spread out on a baking sheet lined with parchment paper and bake at 350˚ for 5 minutes or until golden.  Allow them to cool until ready to spread over the no-bake fruit pie

In a saucepan set on medium heat simmer and stir the berries until they break down, 6-8 minutes. Add the organic sugar and pudding mix, stir until smooth. Reduce heat to low simmer, stirring often and allow to thicken, about 10 minutes.  Stir in the butter.