This seemed somehow appropriate to share today, two days into spring 2014. Wait, with the threat of more snow on the way. 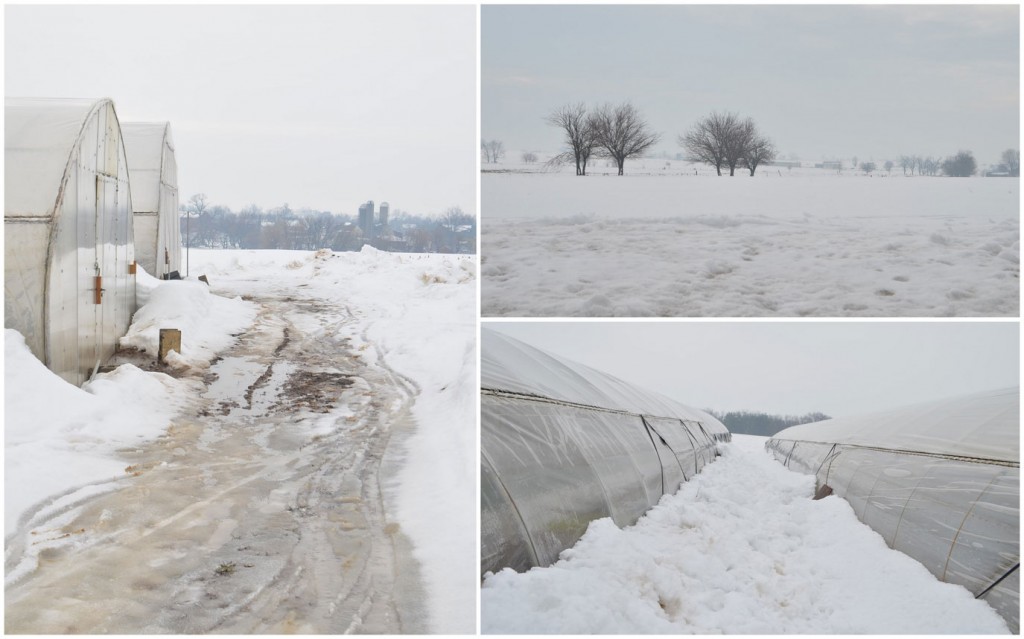 There was an invisible seam where the horizon met white fields, on my snow covered drive to Bird-in-Hand. It’s been white for weeks now. Walking in mud and ice through the greenhouses doors into vibrant color made me feel like a kid in a Willy Wonka world.

I spent the morning on the Groff’s vegetable farm. You might think the Groff’s are renowned for their Lancaster Central Market Stand, where they sell homegrown sweet potatoes and lettuce. It turns out their farm neighbors go bonkers for their celery hearts. They can’t keep the fridge at the farm full enough for local shoppers. 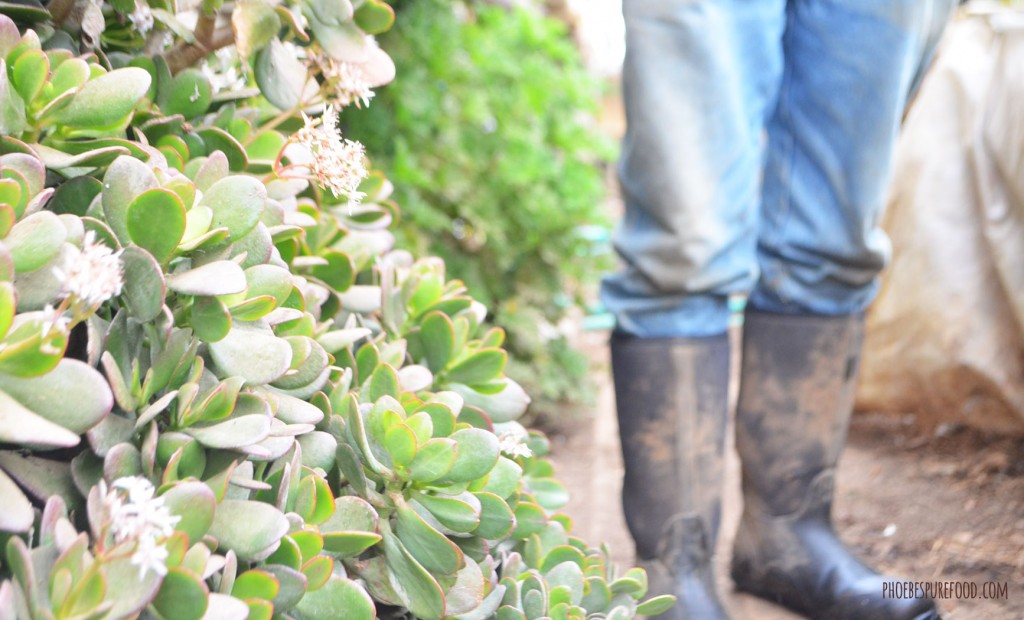 The Groff’s 10.5 acre farm was bought by his father, Rohrer Meck Groff.  It now supports Earl & Edith and their son’s family, it’s current residents.  Rohrer Groff secured the Lancaster Central Market farm stand in 1946 and increased it’s size during the 1974 stand auction.  I imagine it was a site to see. In an auction-style sale two-thirds (about 35-37) of the market’s stands were sold in 2 hours, as Earl explains it.  Many current market stand holders, Groff’s included, expanded their booths during that sale. 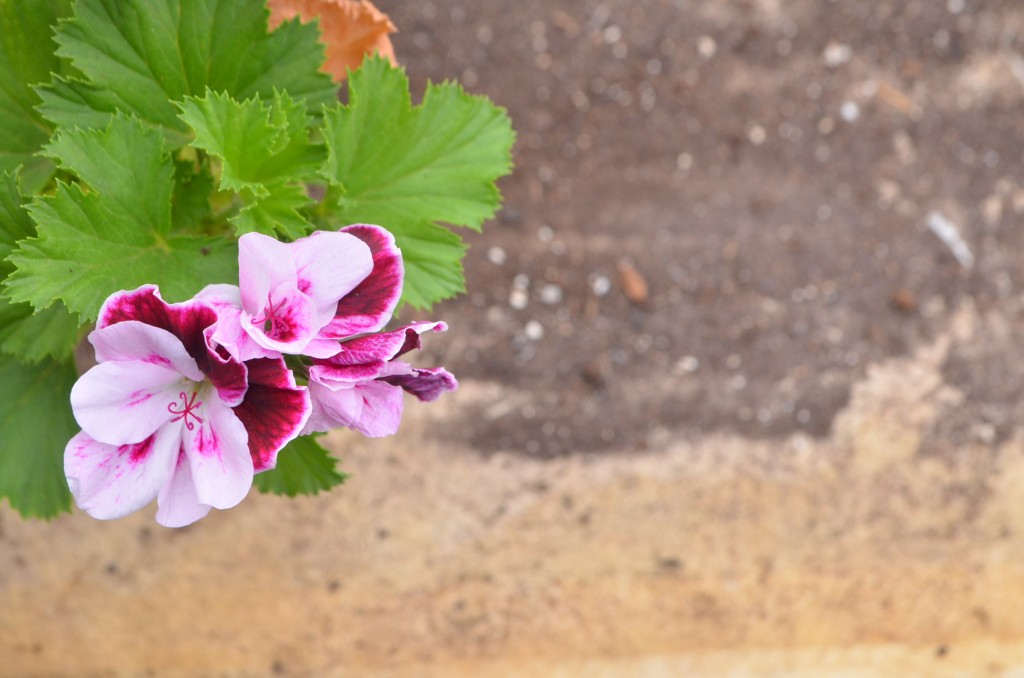 The Groff’s 10.5 acre farm was bought by his father, Rohrer Meck Groff.  It now supports Earl and Edith and their son’s family, it’s current residents. Rohrer Groff secured the Lancaster Central Market farm stand in 1946 and increased it’s size during the 1974 stand auction. I imagine that auction was a site to see. In an auction-style sale two-thirds (about 35-37) of the market’s stands were sold in two hours, as Earl explains it.  Many current market stand holders, Groff’s included, expanded their booth’s during that sale. 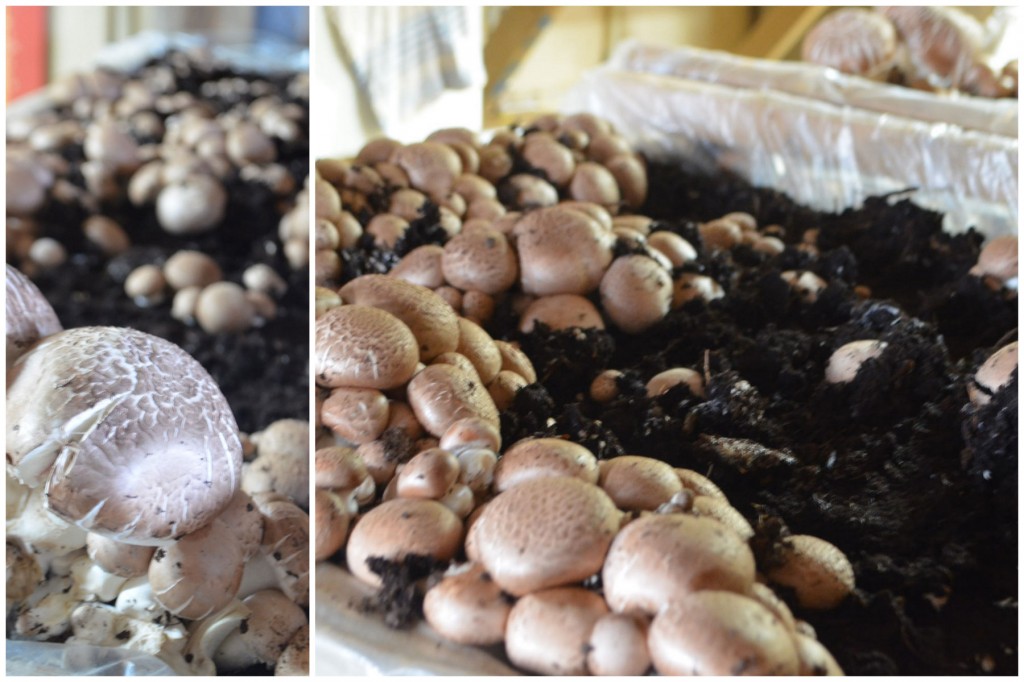 Before we get down to business, can you guess what Ed would have chosen to be if not a vegetable farmer?  The answer is not surprising after walking into the greenhouse.  A flower gardener, Ed says. There were splashes of color reflecting his passion in the pots of gerbera daisies, scented geraniums, a rescued hibiscus (before his parents passed he rescued the weary plant that is now blooming in delight), and succulent plant started from his parent’s collection.

If you want these mushroom you must get to Market early. I often wonder who shops the Market at 6 a.m. and now I know. Savy shoppers are buying the cream of the crop, literally.

When expansion was on the table Ed was eager to build a greenhouse, and his falter relented.

• Houses can be built lengthwise from north to south or east to west.

• The ideal temp in the greenhouse is 53 degrees.

• The cover is made of 2 layers of plastic (which should never be put on a windy day, Earl said…like he maybe tried that once)

• A tiny fan blows air between the 2 layers to aid in insulation.

• If you heat your greenhouse with a propane heater it will burn up all the oxygen inside (choking plants and you) unless you have the heater pulling air from outside the structure.  Well, now they know that.

The Groff’s grow a variety of lettuce and it’s serious business, a 3-step process.  Each head is started by seed in a 200 cell tray, hand transplanted into a 128 cell tray before being hand planted in the soil.  It is a cumbersome process but yields a healthier head of lettuce which would otherwise not survive weed crowding.   The white plastic cover draws the sun, in case you were wondering.  I was.

The next time you buy a head of vibrantly colored lettuce just remember this photo with all the little cells of seedlings.  This is love and a dedication to quality. 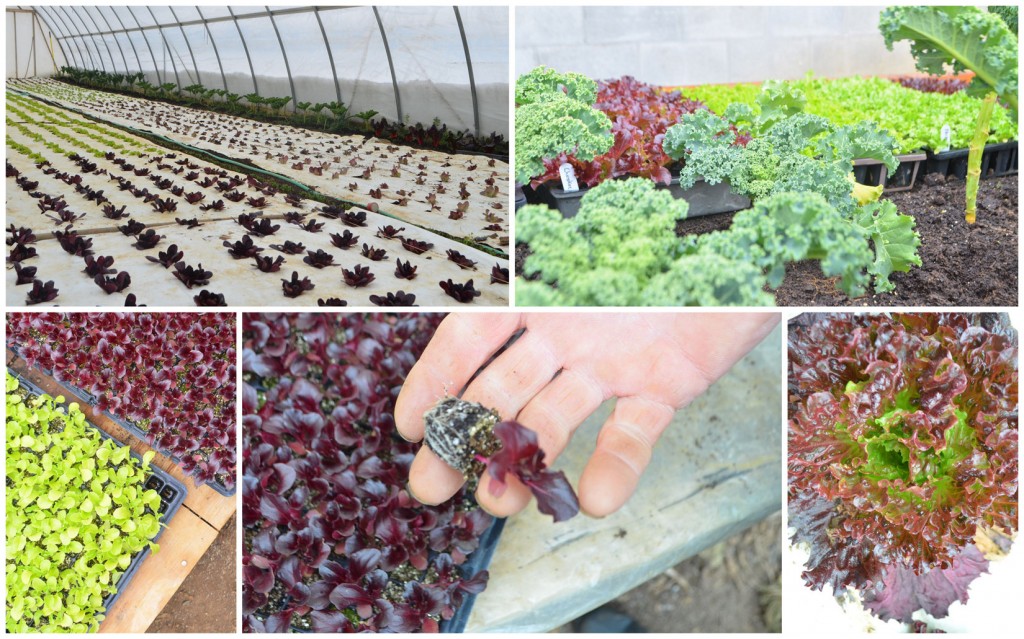 After the lettuce has it’s turn in the ground it is filled with buckwheat, “green manure.”  The buckwheat is matured and tilled into the soil, a natural way to fertilize/enrich the soil.  The tomatoes and white blossom sugar peas are then planted.   Here’s where it get’s good and clever.   There is a wire fence attached to the the ceiling, the free end swings down to touch the ground becoming a trellis for the peas to climb.   Ed had just planted a long row of peas that were peaking through the soil.

Though the Groff farm is not certified organic they are careful to choose natural methods of cultivation, weed and pest control. Every square inch of space is used and what space is not producing Market products might be hiding some edible weeds.   I hate to say weeds after spending time with Earl.

Chickweed (growing with the radish in the bottom photo) is said to aid in weight loss, Earl said. It can be steeped in hot water but the Groff’s don’t need any help in that department so this green grows happily between the radishes, thanks to the nitrogen rich soil. Lambsquarters is a weed I have been continually pulling in my garden. As it turns out, it’s edible.  The Groff’s said they use it like spinach, in salads or smoothies, and it tastes great. Lastly, there is the “crackerweed” or mallow. I always thought it was a type of geranium but Earl said folks eat the cracker-like flower. 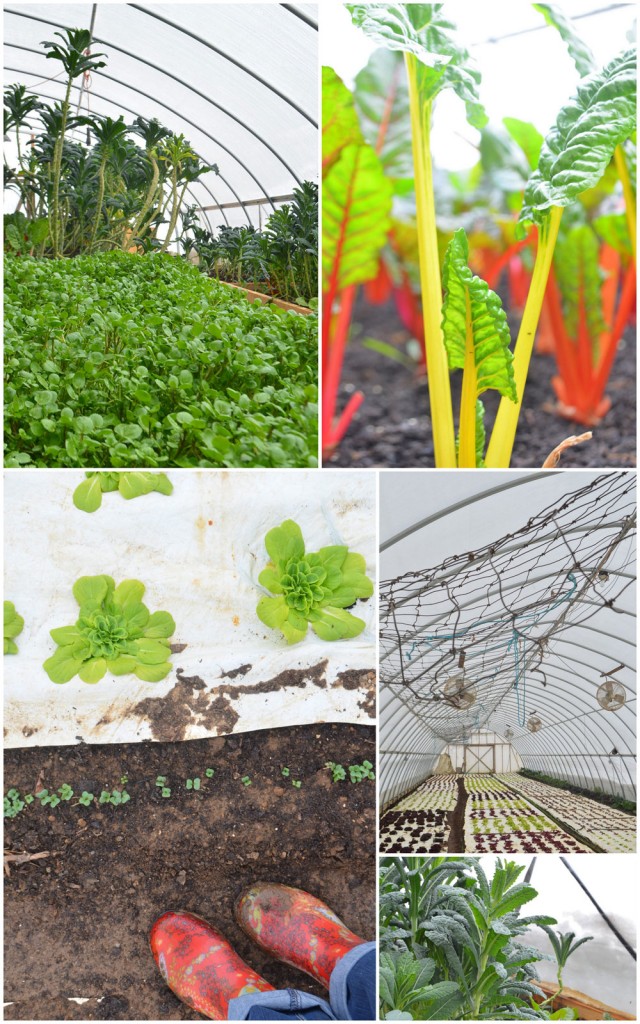 I walked away with not just visions of lettuce, kale and greens but recipe inspiration. The Groff’s make use of every edible growth and eat for wellness too.

Edith makes a smoothie using stevia, lemons, kale, spinach and kombucha. They make their own kombucha. Is it possible their elixir gives these two that beautiful glow? I tend to think it is their faith, loving what they do, and sharing what they love.