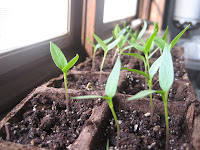 I can’t seem to locate my gardening journal from 2008 and 2009 so I will start to note in my blog and hope I never forget my password!

During the first week in March, I tried something new… I started seeds using organic seed starting soil and compostable containers:

I clearly labeled my little gems, kept them moist and in the sun. To easily maintain the moisture level, I put my seed containers in the lidded salad containers from Giant (the 16 oz organic salad greens plastic container)….thought this was pretty genius instead of using trays.

It was exciting to see the little buds emerge (as if I have anything to do with this little miracle). I tried to start seeds a few years back with no success… probably had something to do with that. There are 5 salad containers full of seeds. Almost all the seeds sprouted with the exception of the peppers. I set those containers aside to try some other seeds when I had a minute. 2 weeks later I found a minute and pulled out the containers only to find peppers sprouting! Guess they just needed to be ignored. They are doing well now.

We are still working our soil and waiting a bit before I get these seeds in the ground. They get to keep me company in the house for just a bit longer. Sometimes I let them outside, on sunny warm days. Wonder if I should play music for them so they can enjoy this nice, quiet time before I put them out in the hot sun, amongst all the bugs and they have to start working and producing? 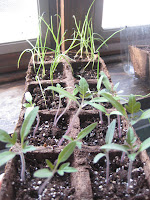