It was Dan’s birthday weekend but he planned a night away to a surprise destination.  He is very good at keeping a lid on things when he wants to and gave no real clues.   We left on Sunday morning with a hint we were stopping for lunch at a place we would normally never give a second glance.  He timed it so we would arrive just as they opened to be sure we would find a spot.  He heard it gets mobbed.

Then on to our destination.  The only clue, loose interpretation of the word, was that the ride would be about 2 -3 hours.   Boston was off the table.  I thought DC, Baltimore or Jersey.  There would be walking because he seemed concerned about rain forecasts.  There was an event we were attending.

The trip began with a hop onto the turnpike heading west. We got off at the Harrisburg exchange and headed north on 322.  The only destination up that way was . . . well, not really sure.

After about an hour into the drive Dan got a bit nervous that we missed our lunch spot.   He said it was located on a busy road next to several adult stores.   Sounded appealing. 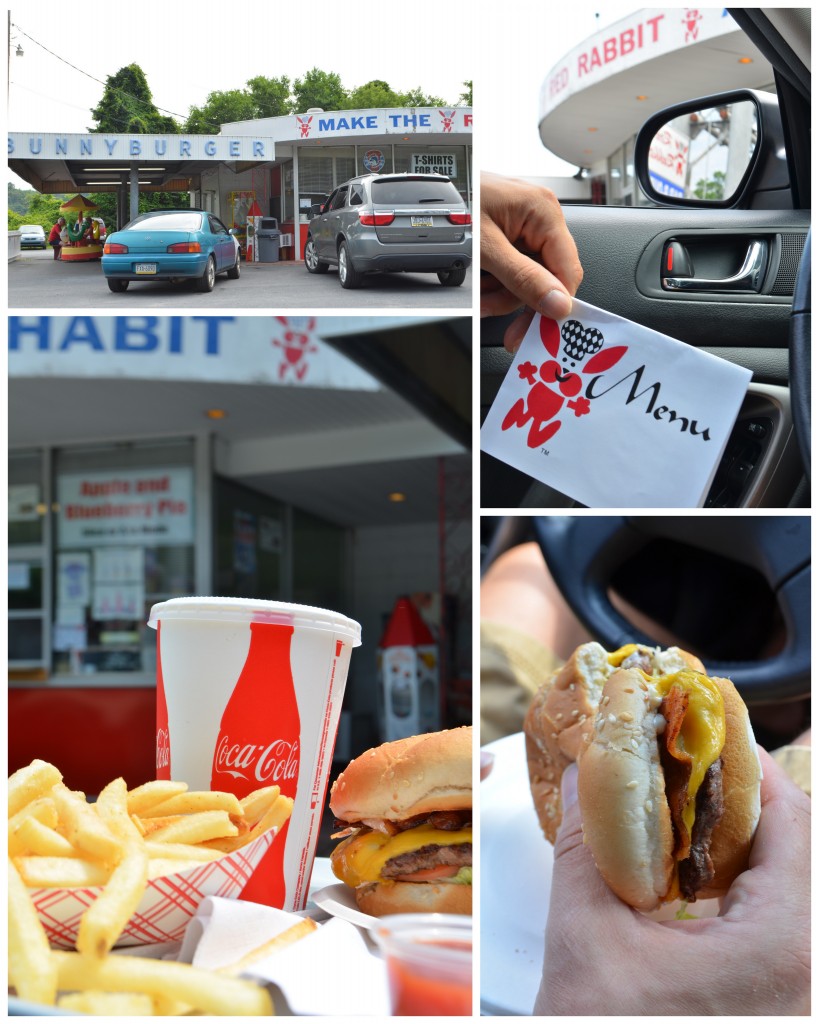 Drive-in bringing back retro, she said.  Uh… I don’t think it ever went anywhere, he said.  Looked at the menu.  The Red Rabbit have been rockin’ the rabbit burger since 1964.   It turns out this little burger place is very well know to Penn State grads.  Let’s be honest, there is not much between here and there.   It’s more than that.

Drive up and a friendly server comes to you!  The menu runs from hotdogs, pulled pork, grilled cheese to milkshakes.  When the food was ready it was served on a tray propped on our car door window.

Dan was told, by everyone who advised us stop, we had to eat the Rabbit Burger.  It is an all beef patty, lettuce, tomato, bacon, cheese and some kind of secret sauce.   This was my quarterly beef eating.  I think it was worth it.   Mystery sauce kinda scares me so I did sort of scrape some of it off.

The drive continued.  I think Dan was surprised there was a whole lot of nothing on the stretch of 322.  We did pass a sign for a winery.  I think every sign we passed pretty much only read the distance to State College. 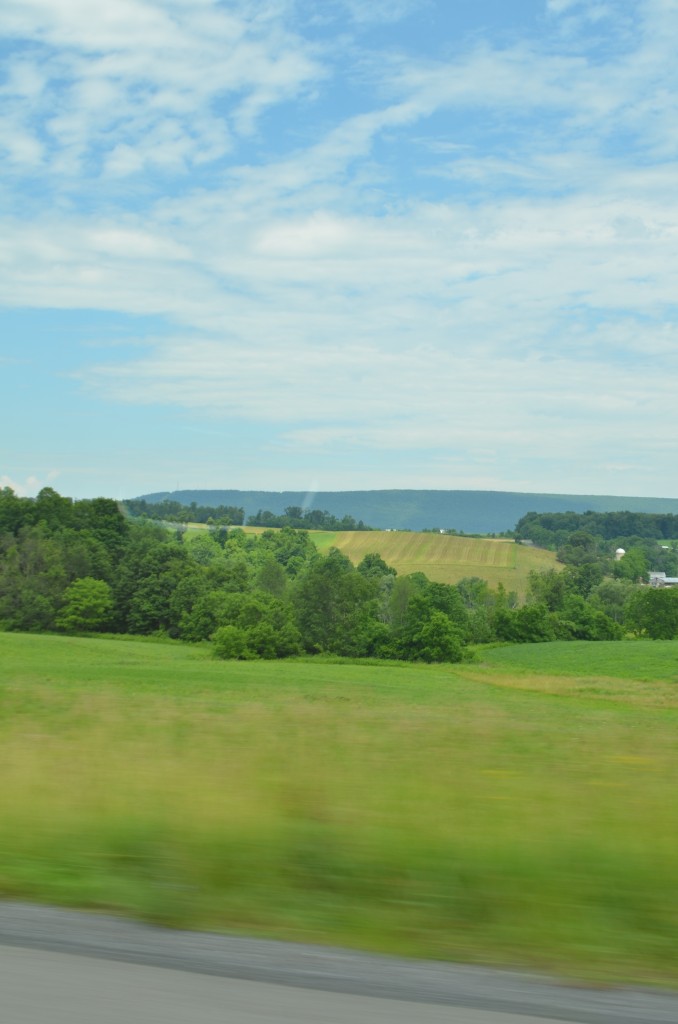 Our hotel was two blocks off the main street. It was the perfect location to walk the shops, enjoy a cold beer, murals and appies.

Insert some walking, shopping and plain ol’ no thinking required relaxing time.   There are so many beautiful murals we spotted.  I did buy souvenirs.  They were edible.  No surprise.

Dan was still keeping the night’s event a secret.   It wasn’t until a light dinner, drinks curbside, in the rain at 201 that I finally guessed the night’s headliner.  STEVE MARTIN & the Steep Canyon Rangers! They performed in Philly on Friday night but we were in Lancaster for a Moxie House event.

As soon as we were ready to head on over to the Creamery it poured.  Torrential downpour.   So we settled in a bit deeper, slowly sipped the beer, thanking the rain that may just have cleared out a potential ice cream mob at the Creamery.  We heard that there is often long lines for that ice cream.

Dan enjoyed his coconut chip and I had a black walnut froyo.   I was so wound up about the show not really sure about the details but it was ice cream how much is there to say?

The concert has to be one of the best shows I’ve ever attended.  Even Dan enjoyed the music and it helped that Steve infused his comedy into the show.  Edie shared backstories in the creation of her lyrics, it was memorizing.  Sigh…it was just wonderful!

Breakfast . . .  I was on the hunt for creamed chip beef. Yes, that’s weird I know.   When it was not available I substituted with chocochip pancakes.  Dan helped me with half of the stack. He is the french toast connoisseur.

Then we were off… with one stop, that I’ll share another day.

What a wonderful weekend.  It was just one night and so much fun to be had in our own backyard! 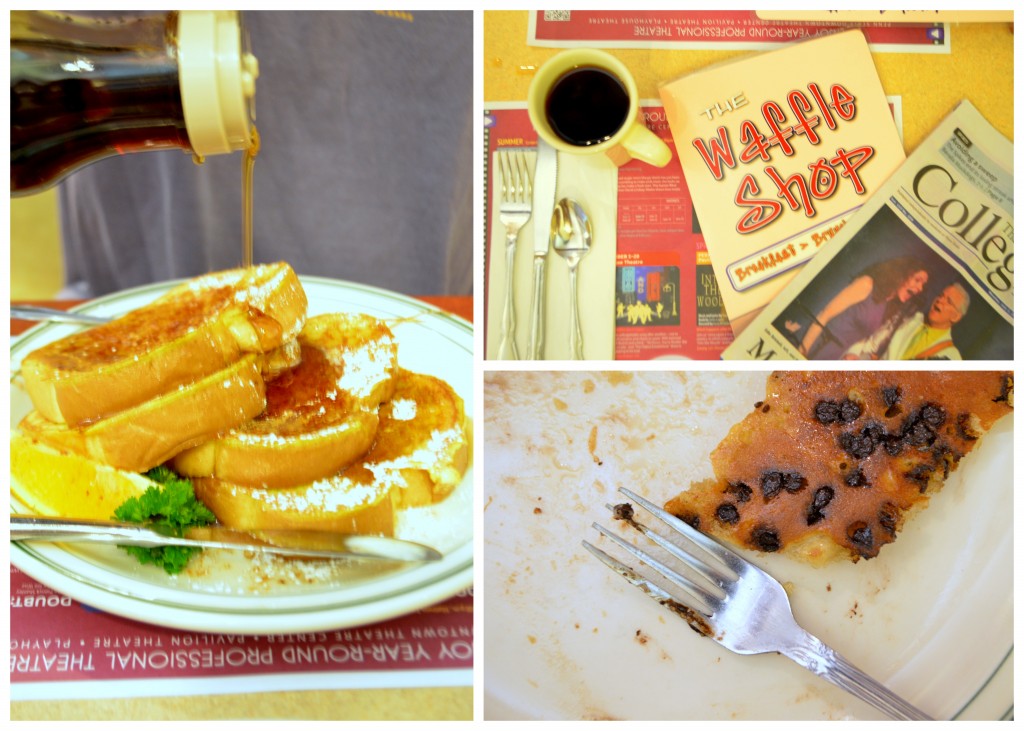